What’s on this site…

Pick a Category, Any Category!

Posts from Back in Time

Those of you that have known me for a while, both in real life as well as online, know very well that I’m very active in politics and ethics. I have long written about what I’m passionate about, and have used my accounts to share with the world, what I consider injustices and atrocities.

My stance has always been that if you see something that you believe is wrong, or horrific, show the rest of the world. A lot of people inadvertently have their head buried in the sand, especially with media being a bit biased in certain demographics. It’s incredibly hard to get information these days, despite the journalists who head to the front lines to share photos and interviews with us.

So I share what I can. I spread my opinion, usually with sources, via my accounts and this blog. Maybe someone out there, will read them, open discussion and information can be exchanged. Maybe someone will learn something that they didn’t currently know, whether it’s the conditions in the camps at our border or a politicians history.

Most importantly, I share screenshots of atrocious behavior from Homophobes, Nazis, White Supremacists, and generally bigoted people. Why? Because in this country, in our current political climate, this kind of behavior is acceptable and more and more of them are coming out of the woodwork. 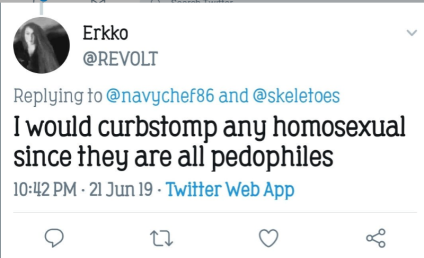 This is from a white power woman who argued with me on twitter last night, the rest of her page was 100% white power garbage.

Like I said in the tweet at the top, if you don’t call out the bullshit, if you don’t stand up to racism, it lets everyone know that it’s acceptable, and no one will do anything to change it. (Note: that tweet was before I knew she was a Nazi, Jon went and looked at her timeline as I was dealing with threats for criticizing a bot on Trump’s timeline).

This is something I’ve always done, this is how I was raised (especially by my grandmother).. that you stand up against those that do wrong, commit atrocities, or those that would destroy this country.

Apparently, despite my accounts all being like this since I got into politics (and had readily available internet, haha), despite the fact that this is who I am both in real life and online.. I hurt someone’s feelings. It’s bound to happen, and it does happen quite a bit. I shared this: 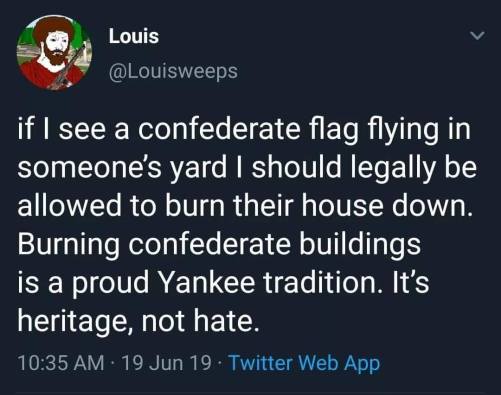 The whole point behind this tweet was how stupid it is to use “culture and heritage” and the confederate flag as a platform for being a complete ass. Those that hide behind that flag with their hatred don’t think it’s so funny if us Northerners use the same mindset. I shared this on my page, hoping to piss some more people off, as true colors have been showing time and time again. (It truly makes it easier to delete people off of my friends list.)

Not to mention, I have made it ABUNDANTLY clear how I feel about that flag being used to spread fear in everyone who is not white/conservative. I couldn’t give two fucks what your heritage is, or if you’re proud of it or not.. this flag means a lot of horrible things to a lot of different people, and that’s the way it is.

Anyways, as predicted. My old friend responded. He apparently missed the ENTIRE point of the tweet, and told me I could come try if I “want a closed casket funeral”. Despite me explaining the tweet, he still went off on this tirade about me being a Social Justice Warrior. He was tired of me “picking fights”, posting information and “ramming it down his throat”. It apparently didn’t matter that I’ve been this way since we met.. back when I was 16 years old. You know, when I actually lit confederate flags on fire and was a SHARP? It also didn’t matter that there was a little button called “unfriend”.

I had hurt his little snowflake feelings. Or rather, I made him think uncomfortable truths. (Although I am kind of upset that it was someone else’s tweet that did it, not my comments on his page about his blatant misogyny.) Either way, I accomplished what I set out to do, and even got called a Social Justice Warrior.

My point is to call out bullshit when you see it. If you hurt people’s feelings along the way, make them uncomfortable, or even lose friends, it’s worth it. I don’t know about you guys, but I’m taking back the term Social Justice Warrior. I’m not going to let the assfucks who turned it into a derogatory term own it anymore.

Just remember, if you don’t stand up to injustices.. they become normal. Don’t stop standing up and speaking out just because you offend someone, or because they try to drag you down. Someone has to do it. Why shouldn’t it be us?

Stand up.
Use your available platform.
Share information.
Make the world a better place.

Reply, do it, you know you want to! Cancel reply